After having some discussions with folks on the /r/sleeperbattlestations and /r/sleepingoptiplex subreddits, I wanted to toss up a quick post on what I'm doing with my server build.

The more I hear bad stories coming out of Silicon Valley regarding user privacy the more I want to de-Google-ify my life. Having calendars and email services and data stores available to me for free is super convenient but it's not worth the hassle of having to rely on a small handful of companies to do the right thing (regarding both security and ethics).

But I have been running some servers (mostly through Digital Ocean) for the last several years, so I am fairly comfortable running my own services.

And running a server in my apartment to have better stewardship of my data is right up my alley.

Honestly, I've been wanting to do this for a while. It'll be fairly easy for me to use something like Proxmox to stand up some services like NextCloud, Home Assistant, Gogs, a Minecraft server, and a handful of other things.

Just need to build the thing first, you know? I definitely want to build a sleeper. I always love seeing cool builds of great modern hardware in a retro-ish chassis, so picking out a case is obviously where I needed to start.

Whatever I chose needed to hold a motherboard with an AM4 socket and remind me of my childhood.

Something like the old beige tower from our guest room with a Pentium II in it or the charcoal Dell Dimension 4500-ish machine I used for my homework in middle school.

After a few failed Craigslist attempts to pick up a Dimension I ultimately settled on an OptiPlex 390. 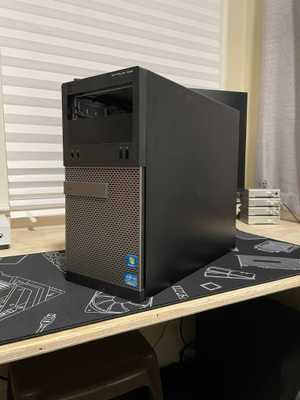 Awww yeah, that's the stuff. Just like what my grade school computer labs used to run.

I managed to snag it for $20 from ReSource in Williston, VT while I was up north for a couple of weeks in December (after following all relevant VT state-mandated COVID-19 travel protocols).

Huge thank you to the fellow Champlain grad who helped me find and strip the computer from their warehouse!

Once I got home I worked on finalizing my parts list:

I'm overbuilding the hell out of this thing, but it should last me a long, long time. Once my new power supply comes in (more on that later), I'll just need to order the RAM and hard drives before I can start building.

Once I got the parts figured out, I needed to tackle modding the case a bit to fix the obvious airflow problem. 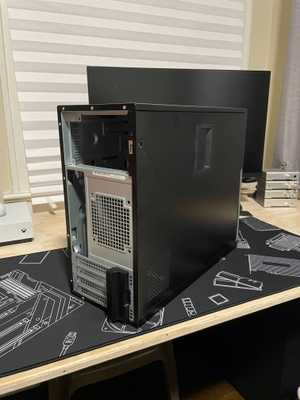 The back looks fine. Plenty of slots for the 1050 Ti (potential hardware transcoding), a regular size cutout for rear IO, room for a full-sized PSU, and even a spot for a fan! 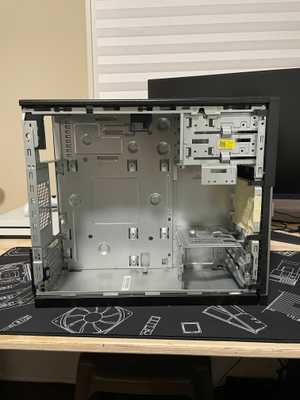 Inside is super clean once you strip it down. Screw layout for a standard Micro-ATX motherboard, two dedicated slots for drives, two 5.5" slots (surprise, more hard drives), and plenty of room in the front I can take advantage of for a fan intake.

The only issue here is that while there's plenty of room for a full-sized ATX power supply in here, I missed that black hook for the side panel latch even after measuring twice. The ATX unit I ordered didn't quite fit so I hard to return it for the SGX form factor one, which SHOULD fit. That'll be coming in the mail by the end of this week - fingers crossed. 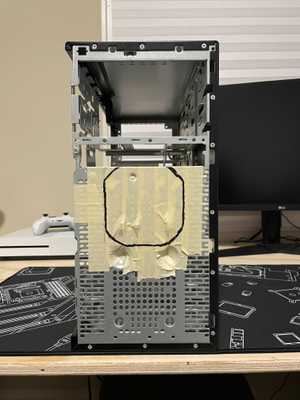 The one real bit of modding I had to do was cutting a hole in the front of this thing. One fan wasn't going to cut it, so I wanted to throw an intake in there too.

I forgot to take a picture before I taped it up, but the whole front is the same type of metal grille that you can see right below the tape line.

Either way: I taped it up, marked out the hole so that there was still room for mounting hardware, and cut the thing out with a rotary tool. 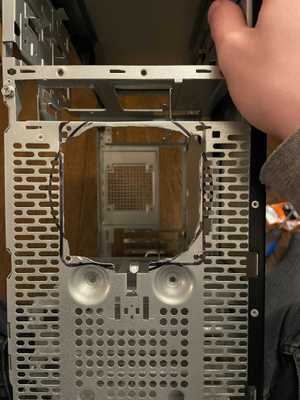 Not the prettiest cut, but not bad for my first job with a new tool. 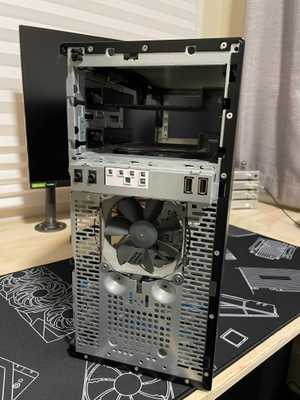 The fan mounted nice enough after I gave the mounting holes a second pass to make sure everything lines up. Plenty of room for airflow. 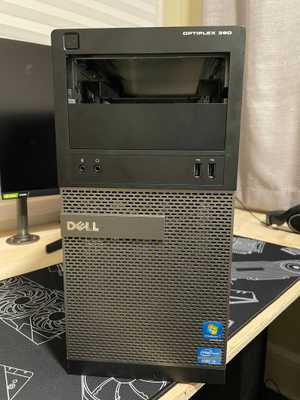 And honestly, once I got the front panel back on, you can't even tell the case has been modded. 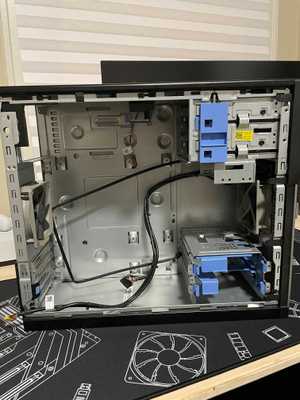 After using some canned air to get all the dust and stuff out, I tossed the exhaust fan and all the odds & ends that came with the shell back in.

Like I said, there are still a few parts to order before I can start the build in earnest.

Might even take a day off work for all the fun. ;)

That adventure will be worthy of a whole other post.

Once that's up, it should be followed by another one on setting up Proxmox.